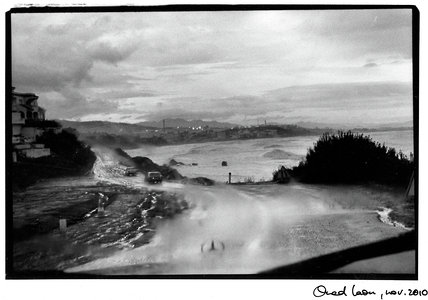 Freelance French photographer Matthieu Chazal (born in 1975) is graduated in geography, philosophy and journalism. Reporter at « Sud Ouest » newspaper (Bordeaux, France), then photographer, he contributed to periodicals (Politis, France ; El Mundo, Spain...). With a documentary project about Gypsies inTurkey, he participated in group and personal exhibitions in France and Turkey (Musée de l'immigration, Paris ;Hafriyat Gallery, Istanbul...).
For the last years he travels around the Eastern Mediterranean Sea and its wide surroundings. He uses anologic black and white photography, which fits with his unhurried journeys, to show the daily life in the Balkans, the Caucasus and the Middle East. Taking in all directions the paths of the first and most recent migrations, which are also the meeting points between East and West, he captures simple moments and seismic events. He realizes series of « Chronicles », enriched year after year, exhibited in France, Italy, Bulgaria... For this long-winded work, he received in 2019 the Albert Kahn Museum Grant.
In parallel, he realizes a documentary project about rurality in Charente, France. It is in this remote region, where he grew up, that he does his work in the darkroom.
Lastly, he organizes photographic workshops with radical Islamist detainees for a rehabilitation programme at the prison of Gradignan, France.